Skip to main content
Conquering space: stargazing in the Canary Islands
21 de May 2014
Experiences and plans
I love Paradores
Our charming spots

The cosmos: focus of ancient fears and eternal questions; infinite source of fantasy; home to errant gods, imaginary civilizations and mythological creatures that conceal their shapes in patterns of bright dots. The night sky is a window onto the universe, humankind's connection to the infinite, the vast and the eternal.

Few places on Earth offer such a wonderful opportunity to admire it in its full extent as the Canary Islands, particularly Tenerife and La Palma. Located near the Equator, the islands provide a perfect view of the skies over the entire Northern Hemisphere and part of the Southern Hemisphere. Far from tropical storms, the clear atmosphere is stabilized by the ocean, with no turbulence, guaranteeing perfect visibility on 90% of summer nights. This is what led the Starlight Foundation to dub these islands "Windows onto the Universe," for the quality of the night sky is truly extraordinary here. Visitors can enjoy stargazing alone and with the naked eye or with the help of specialized guides and companies, using binoculars and telescopes. The amazing observatories at the Instituto de Astrofísica de Canarias (IAC), 2,400 meters above sea level, offer organized tours from March to December. No matter how we observe the stars, the feeling of gazing straight into the face of the cosmos can be one of life's most incredible and unforgettable experiences.

Some of the best places in the world to study the stars are the peaks of Tenerife and Teide National Park. The IAC observatory is located there, populated by many internationally renowned astrophysicists. The quality of its night skies has earned the island the Starlight Tourism Certification. The aim of this initiative is to protect the night skies and defend the right to stargaze. It was created in 2009, with the support of UNESCO, the World Tourism Organization (WTO) and the International Astronomical Union (IAU), among other organizations. Mount Teide is the first UNESCO World Heritage Site certified as a Starlight Tourist Destination. Stargazers will find Mount Guajara and the area around the Parador de Las Cañadas del Teide to be the  best observation spots in the national park. Nighttime visits have increased exponentially, with more than 200,000 being recorded in 2013. You may also want to visit the Science and Cosmos Museum in La Laguna.

The island of Tenerife is currently working on a pioneering European project known as EUSky Route, whose aim is to create astrotourism routes which promote our astronomical heritage and associated resources through a combination of leisure, tourism and astronomy activities. The project is funded by the European Commission and led by Tenerife. Poland, Italy, Greece, Bulgaria, Portugal and the Spanish city of Valencia are currently partners in the project.

Situated at 2,152 meters above sea level in the heart of the Teide National Park, this Parador is the perfect place for astronomy lovers who want to spend a few days observing a pollution-free sky brimming with stars. Every Friday, there is a talk and stargazing session with astronomy instructors. The Parador owns a Newtonian telescope on a Dobsonian mount, equipped with a 10-inch diameter mirror (254 mm) and a focal length of 60 inches (1,524 mm). It also has a Meade Lx10 EMC telescope, with a 202.2-millimeter diameter mirror and a focal length of 20,000 mm.

If Tenerife offers incredible spots from which to gaze out at the universe, the entire island of La Palma seems almost to be a spaceship. The island is the world's first Starlight Reserve. In fact, the foundation's 2007 conference was held here. It was at this event that the agreement was signed and the "Declaration in Defence of the Night Sky and the Right to Starlight" was drafted.
Nor is it chance that the Roque de Los Muchachos Observatory is situated at the highest point on the island. The observatory is home to the Gran Telescopio Canarias telescope, the largest of its kind in the world.

All of La Palma is deeply committed to astrotourism. It was one of the first places to implement the 1988 Sky Act, protecting the island's sky from light, atmospheric and radioelectric pollution. Almost all of the institutions and companies on the island are involved in promoting the quality of the sky and its enjoyment, in a number of areas: cultural (archaeoastronomical sites), scientific (astronomical research), astronomical (observatories and amateur stargazing), scenic or natural (astronomical viewpoints, routes and trails) and tourism (restaurants, themed accommodations, guided tours and astronomical events). 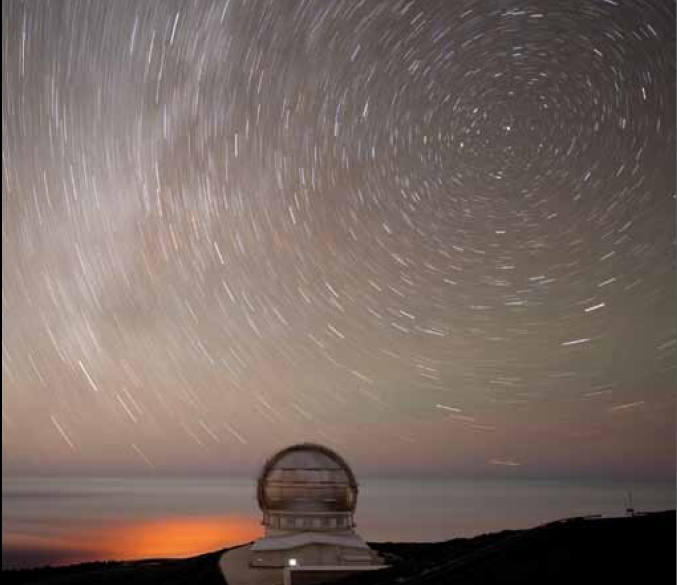 The night sky from La Palma

There are 52 astronomy-themed companies, 3 astronomical trails, 16 viewpoints, astrophotography competitions and even a "stellar wine." In short: your first steps on La Palma mark the start of an amazing journey in conquest of space.

Among the La Palma companies involved in the island's general astrotourism initiative is the Parador. The G-Astronomical dinners were part of this undertaking, featuring a menu with shapes and textures inspired by the cosmos, accompanied by a talk on the stars, and for dessert, a stargazing session at the Parador's viewpoint.