They are the heritage of a people. Nothing better to know a place than to take a walk through its public market where you can find its typical local products as well as the colours, aromas, flavours and accents of a country . The perfect place to meet the locals . From north to south. Old and new markets which retain their essence. Located in avant-garde glass buildings or reflecting the beautiful industrial architecture from iron and brick. Landmarks through which life has passed for ages .

New times have not put an end to this way of understanding shopping as something halfway between need and pleasure. Maybe because the whole city is there, in the centre, or in emblematic neighbourhoods. Traditional merchants who now share space with new traders and all together they have transformed the old food markets into gastromarkets, the very soul of Spanish markets, which were always a place to buy, eat tapas and talk.

The facade of an iconic Spanish market, San Antonio, was built from austere brick. It is located in one of the traditional old style districts of Madrid, Chueca. The market of 'Fortunata and Jacinta', which was mentioned by Benito Pérez Galdós, is now a renovated building, a must and an international reference for tourists coming to the capital of Spain. A gourmet market to buy quality products on the first floor. On the second floor, show-cooking, tasting of international dishes, oysters, salted products, wine, cider, ice cream, cakes and smoothies for consumption on site, to take away or to be home delivered, since you can have everything delivered. On the third floor, market cuisine with fresh seasonal products and menus. Here the products that the customer has purchased in the market are also seasoned to taste.

Just mention at the stand that it is for the cooking of the cuisine of San Antón. And to enjoy life to its fullest, one of the best terraces in town, to taste, smell, see and chat while admiring the skyline of Madrid. 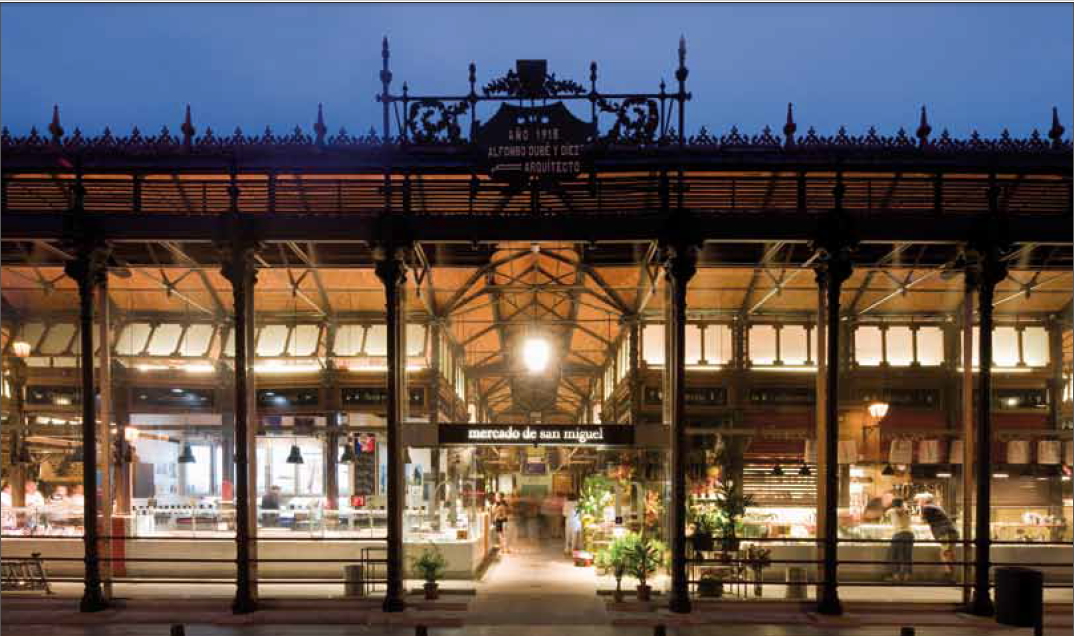 In the Austrias district there is another remarkable market of the Spanish capital, San Miguel. It was inspired by the Parisian markets, made of iron and art, and has been declared a Site of Cultural Interest. It is tourist pilgrimage place where to taste tapas, especially during its wellknown Vermouth Hour. Buy gourmet food at traditional stands where the fourth generation of traders run their stalls of meat, fruit, fish and vegetables.

The southern accent can be found in the Seville market located at Feria Street. A vibrant market with clashing corridors of Mudejar style, full of southern products, flowers and spices, tuna caught in Almadraba traps, if it is the season for it, or a good glass of beer with some fried fish. The essence from the South can be also felt in the Triana Market, built on the Seville ruins of the castle of San Jorge, which hosted the inquisitorial tribunal. Nowadays, the only questions which are made are related to the quality and price of the products within an atmosphere characterised by the warmth of its people and the screaming noise of the merchants who loudly proclaim the excellence of its products. 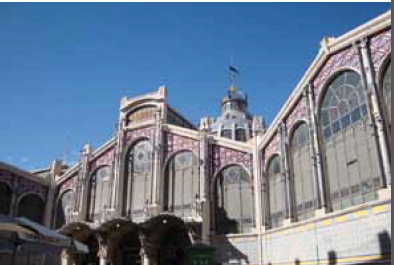 From the Mediterranean, the flavours of the Central Market in Valencia, located in a beautiful modernist building full of light and people. It was built in 1914 and combines the new times and the traditional market under its impressive glass dome, its ceramics and shutters. The fertility of this land is shown at its stalls which give off the scent of orange blossom and citrus as well as on its trays with eels, salted fish and rice. 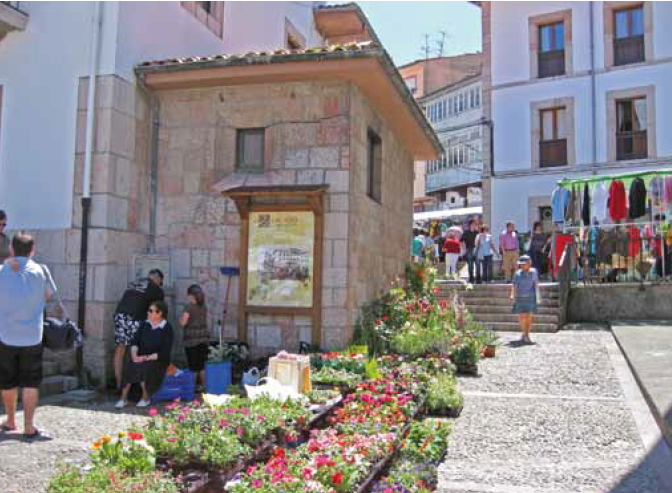 Outdoors and under sunshades, the market of Cangas de Onís, the famous 'mercau' (market), has been taking place for over 200 years now. It is the best place of the region to find the wonderful products from Picos de Europa, including Cabrales cheese, 'arbeyos' (green peas), 'fabes' (beans) and cold cuts of game.

In the interior, the Central Market of Salamanca stands in an imposing building next to the Plaza Mayor. A protected architectural complex whose construction was carried out after a public tendering process. Despite being an example of the finest iron Modernist architecture, we cannot forget the delicacies which are for sale inside: ham from Guijuelo, Morucha beef, lentils from Armunya and wine from the Douro Arribes.

The Market of Cádiz is situated in a square with a Doric portico, on the site of the vegetable garden of the convent of Discalced Carmelites. In this market, Cádiz seafaring tradition becomes more evident: shrimp, crayfish, sea snails, squid, bream, snapper, sea bass, anchovies, sardines and mackerel.

The great market where the spectacular prawns from Sanlúcar are sold and, above all, majestic tuna caught in Almadraba traps, the way of catching fish used by the local fishermen even before the Romans settled in the land of the Pillars of Hercules. The place that smells of the south, tastes of the south and south is spoken. 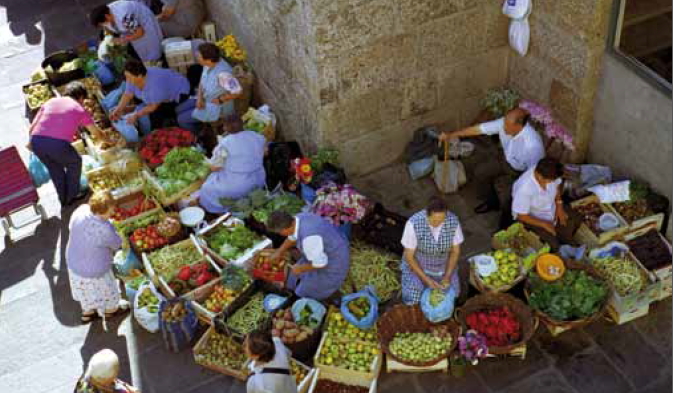 The covered market of Santiago is the second most visited place in this city, after the cathedral. With three centuries of history, it is a place to enjoy with your five senses. Within its wonderful architecture, we can find the best seafood and the best Galician vegetables. In the market there is a bar where freshly-cooked dishes are elaborated with the products customers just bought and, around it, you can discover the 'cooking without a refrigerator', with dozens of market and flea market. 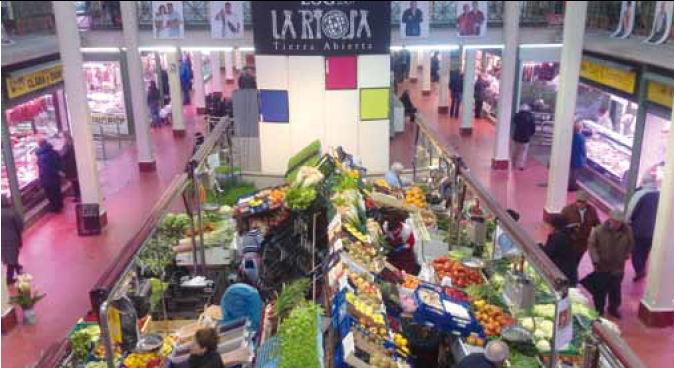 The San Blas Market is a venue steeping in history. It is located in fertile lands which hold wise cooking tips. Logroño trades around, buying the best products from La Rioja vegetable gardens. Inside a historical building, which is part of the city's history, there are stalls and taverns with a thousand scents and the strong flavour of well-seasoned meals.

If you are not looking for seafood, but for products from a beautiful and fertile land, the market of Villalba (Lugo) is a colourful example of a type of life style. Protected by the Andrade medieval fortress, visitors can find here Galician clogs made of poplar wood or the well-known tetilla cheese.

But what has made this market so renowned worldwide are its famous capons, reared in the nearby towns and fed with cornmeal or rye flour and crumbled chestnuts. They are so famous that in December there is a Capon Fair.

New styles of market make their way into the old market square of Ponferrada. Perfect fusion between the traditional stalls on the first floor and the second floor light-filled gastromarket, where the purchased products are cooked at that moment. There are bars, pubs and modern gastrobars and 'prêt à porter' restaurants which serve products from León but with a Galician accent in a land where, according to legend, God rested his hand.