The natural landscapes in Spain are absolutely breathtaking. You can find everything from coastline, to lush valleys, river-filled gorges, and cloud-piercing mountains. Perhaps the most famous mountain range, aptly named the Peaks of Europe (Picos de Europa), majestically awaits your visit in Northern Spain.

The range has three main massifs: Central, Eastern and Western. Between the heights is the Cares Gorge. Through the gorge runs a river with water flowing from the nearby caves. Taking a hike along this bubbling brook is sure to be spectacular.

The highest peak in the range, Torre de Cerrado, reaches 2,650 metres high, while other peaks reach up to heights of 2,600 metres. The mountains are a draw to mountaineers, climbers and hikers throughout the world, all of whom come to enjoy well-established hiking and climbing routes. Pico Urreillu is one route whose paths have been tread by mountaineers since as far back as 1904, when it was first ascended by Pedro Pidal.

While professional climbers have only graced the slopes for the past 150 years, these peaks have been home to shepherds for much longer. Wandering through the mountains, these rugged men tend to cows, goats, sheep, and sometimes even the occasional pig. Their herds still dot the landscape from time to time. 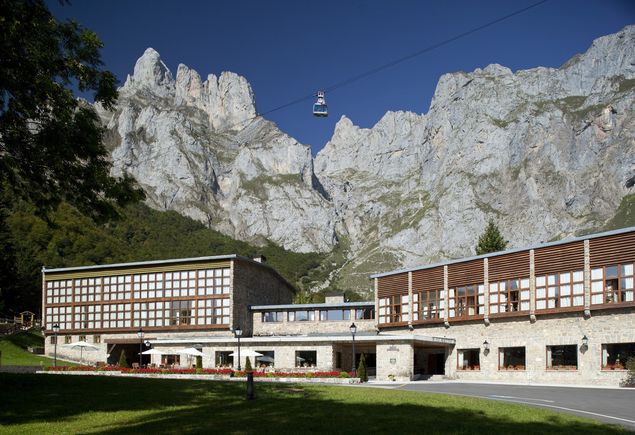 Parador Fuente De sits right in the foothills of the Picos de Europa. The modern hotel has a very rustic feel to it. While making the drive, onlookers can spot tiny villages dotted along the landscape. The interior is decorated with plenty of wooden and leather furniture, creating a cosy warmth of a cottage or lodge.

Surrounded by towering mountains and a lush green landscape to wander, the luxury hotel is exactly where the weary traveller will want to find respite. The restaurant prepares traditional Cantabrian cuisine such as Liébana stew and sirloin steak in Tresviso cheese sauce. These dishes warm the belly and the heart.

Parador Gijon is located near the coast in the heart of Isabel Catolica Park. The luxury hotel sits on a lake, making it a peaceful and quiet spot. Being just a short jaunt from the seaside, it is an ideal location to enjoy a day on the beach and a glass of cider before continuing on into the mountains.

From there, travel east along the coast to Parador Santillana Gil Blas, a small picturesque town just outside of Santander. The town has been declared a National Monument, dating back to the 7th century. Enjoy a view of the sea on one side and the Picos de Europa on the other. The small town oozes with history, and is just waiting to tell you its story.

Have you ever been hiking in these hills? Tell us your stories by leaving a comment below.