An extraordinary building, elegantly ancient. The jewel of Galician Renaissance architecture. The oldest hotel in Europe stays vigilant in Praza Do Obradoiro in Santiago de Compostela, right next to Santiago's Cathedral, where all the pilgrims and itinerants from The Way of Saint James look forward to reach. It is the Parador de Santiago de Compostela, one of the most famous ones of the luxury hotel chain. There are so many factors that make this hotel a special spot: its History, the fact of being well-preserved still nowadays, and the building itself. One of the most representative things of this fascinating building are its cloisters, 4 cloisters that give a Greek cross shape to the Parador de Santiago floor. Do you want to know more about them? 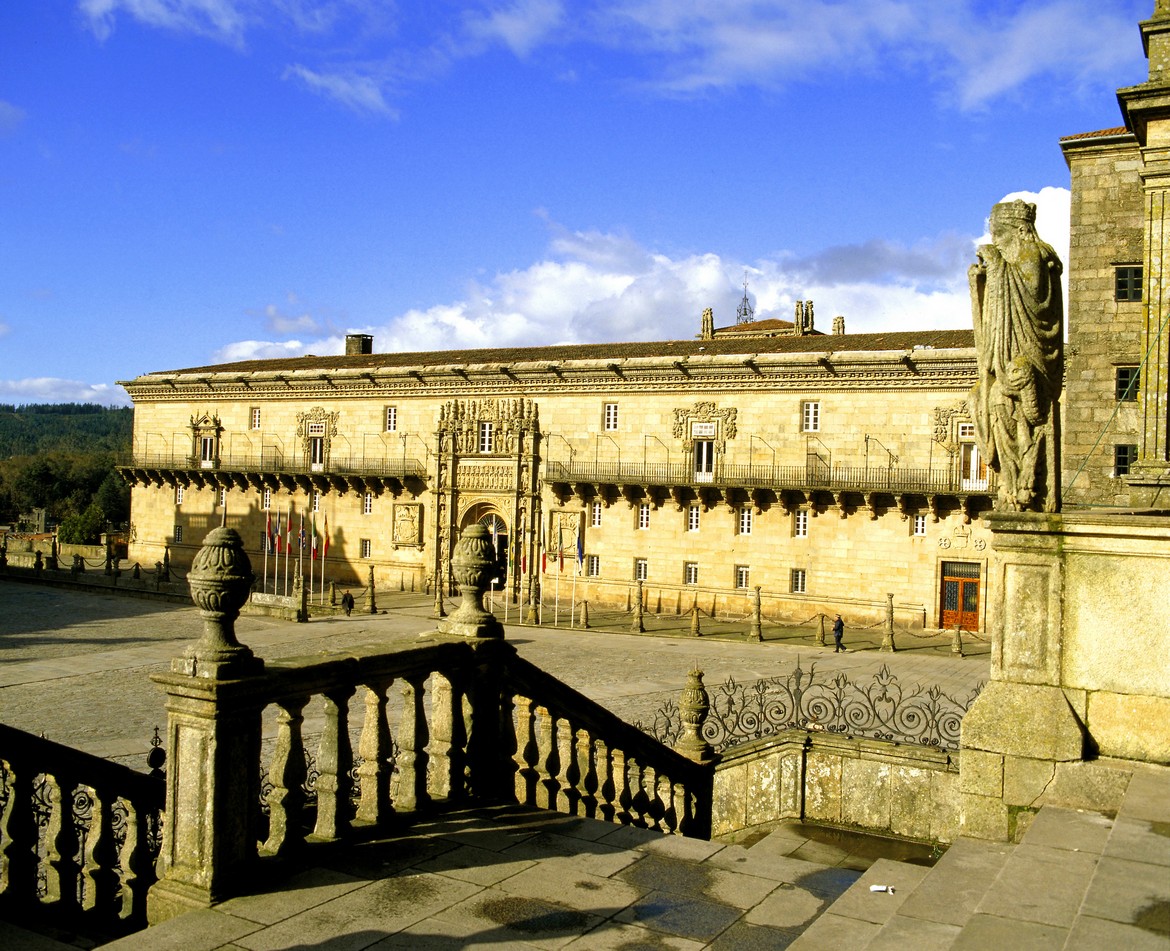 The Parador de Santiago de Compostela was built long time ago, by order of the Catholic Kings, around 1499 by a Renaissance architect of that time, Enrique Egas. It took him until 1509 to finish the piece. In the beginning, it was used as a Royal Hospital for the pilgrims.

At first, the Parador de Santiago just had two cloisters. The first two courts were designed by Enrique Egas too, and they had a characteristic Renaissance style. In the XVIII century, when the other two cloisters were built, they were given the names of San Juan and San Marcos, referring to the Catholic Church's evangelists,so as to give one evangelist name to each of them.

San Juan's cloister, the one on the east side, was also known as the Kitchen's cloister for being where the kitchen of the Royal Hospital was settled, together with the nursery. It was also where the abandoned children and the orphans were taken in. This cloister was rebuilt and reformed in 1561 by Rodrigo Gil. In the centre of it, there is a stone fountain presiding the place. 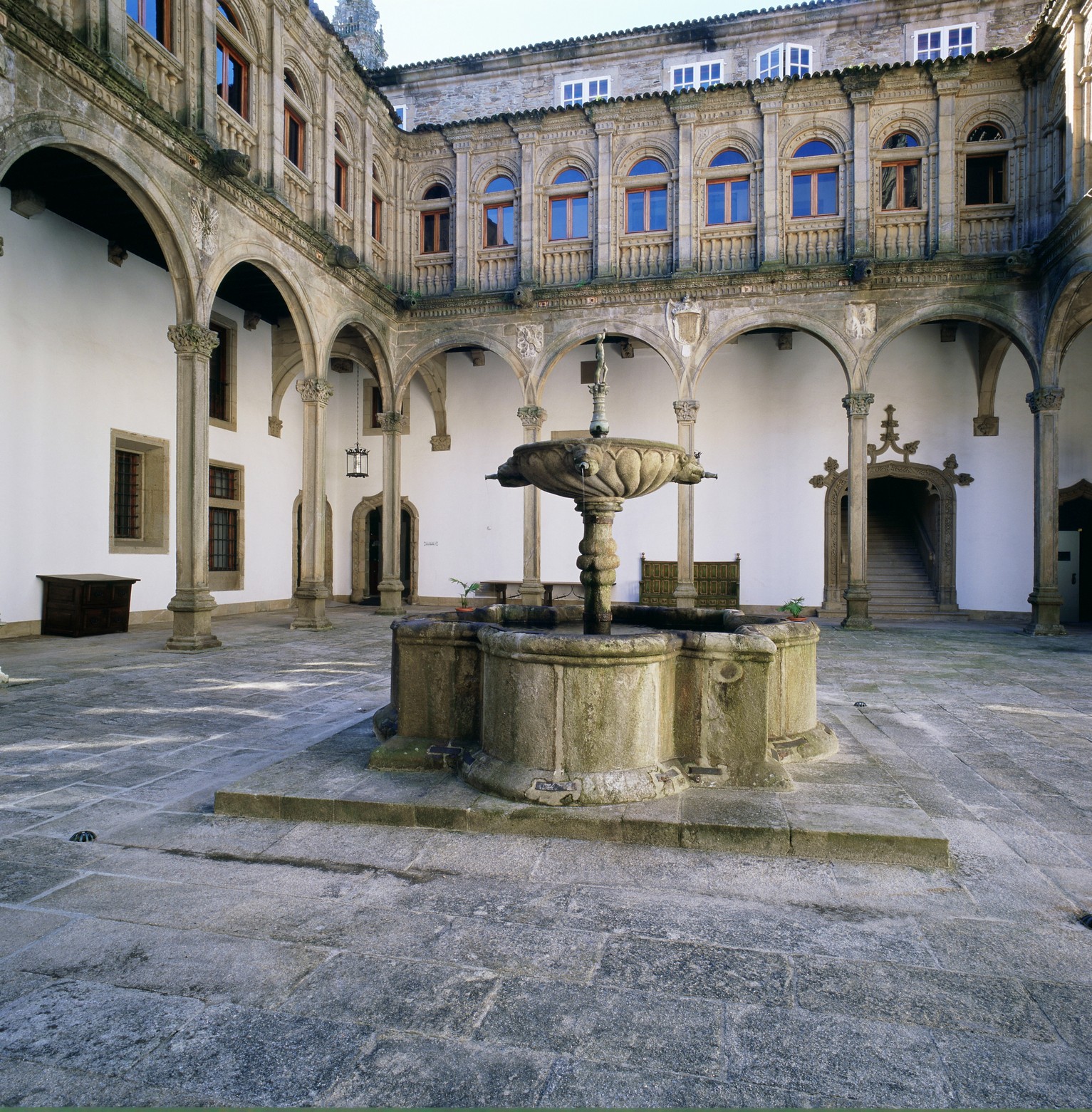 Then it comes the west cloister, San Marcos one, also with a beautiful fountain with tritons in the middle. It keeps the Renaissance style San Juan's cloister has, as both were built concurrently. At this location, the old pharmacy of the Royal Hospital was held, that is why it was first known as "el claustro de la Botica" (the Pharmacy cloister). 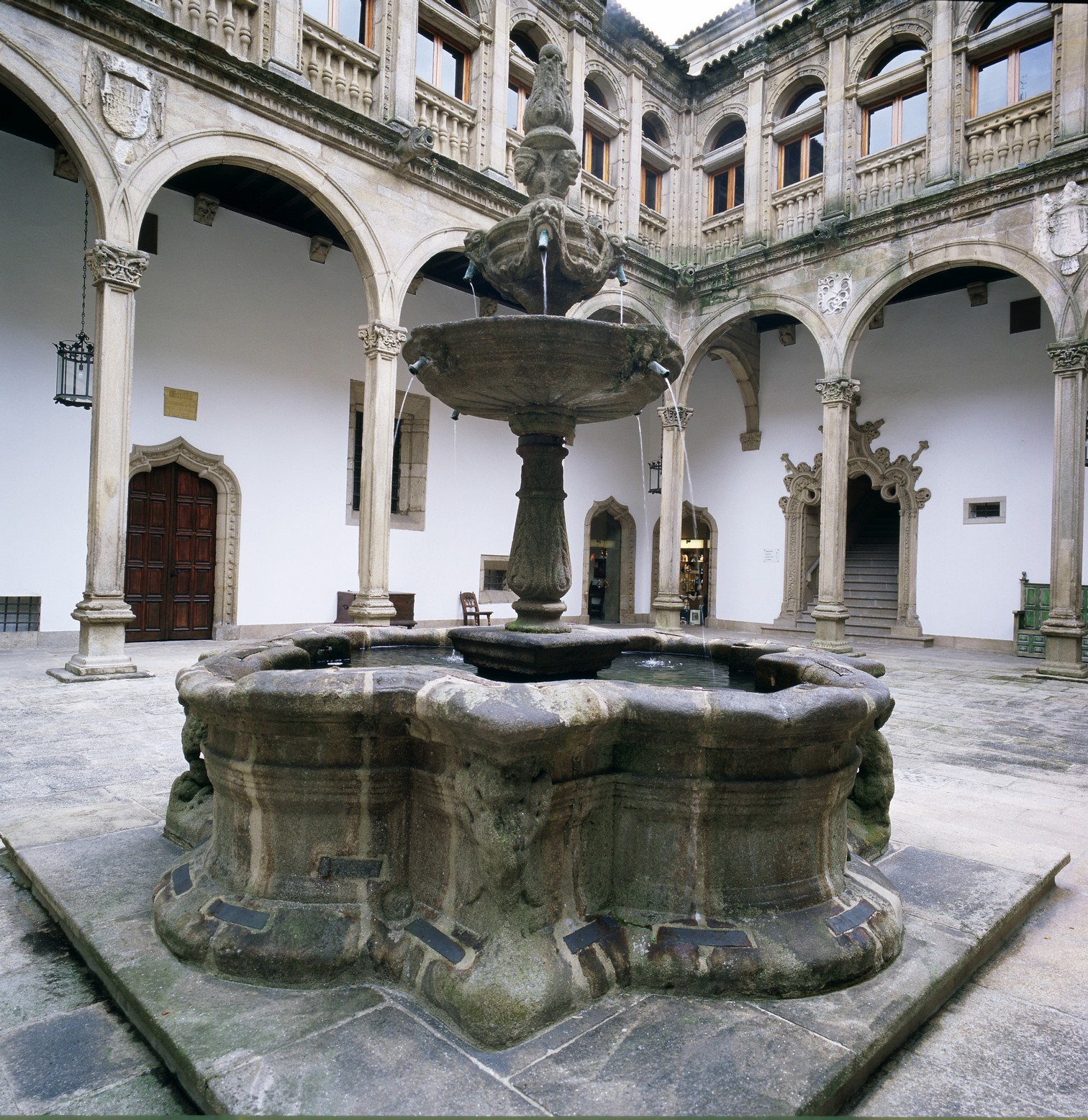 After this two first cloisters, there are two subsequent ones. It can be easily said that they do not belong to the same period of time as these two new ones have a more Baroque style, and they were built later on in the XVIII century. As it was mentioned, the given names to these cloisters were the names of the other two evangelists: San Mateo and San Lucas.

San Mateo's cloister has a distinctive garden with a hedgerow of buses. It has two crosses in representation of the Royal Hospital, and two crowns representing the Catholic Kings, Isabel and Fernando. The court is surrounded by balconies and windows that are looking and paying attention to the water well that is in the centre of the cloister. 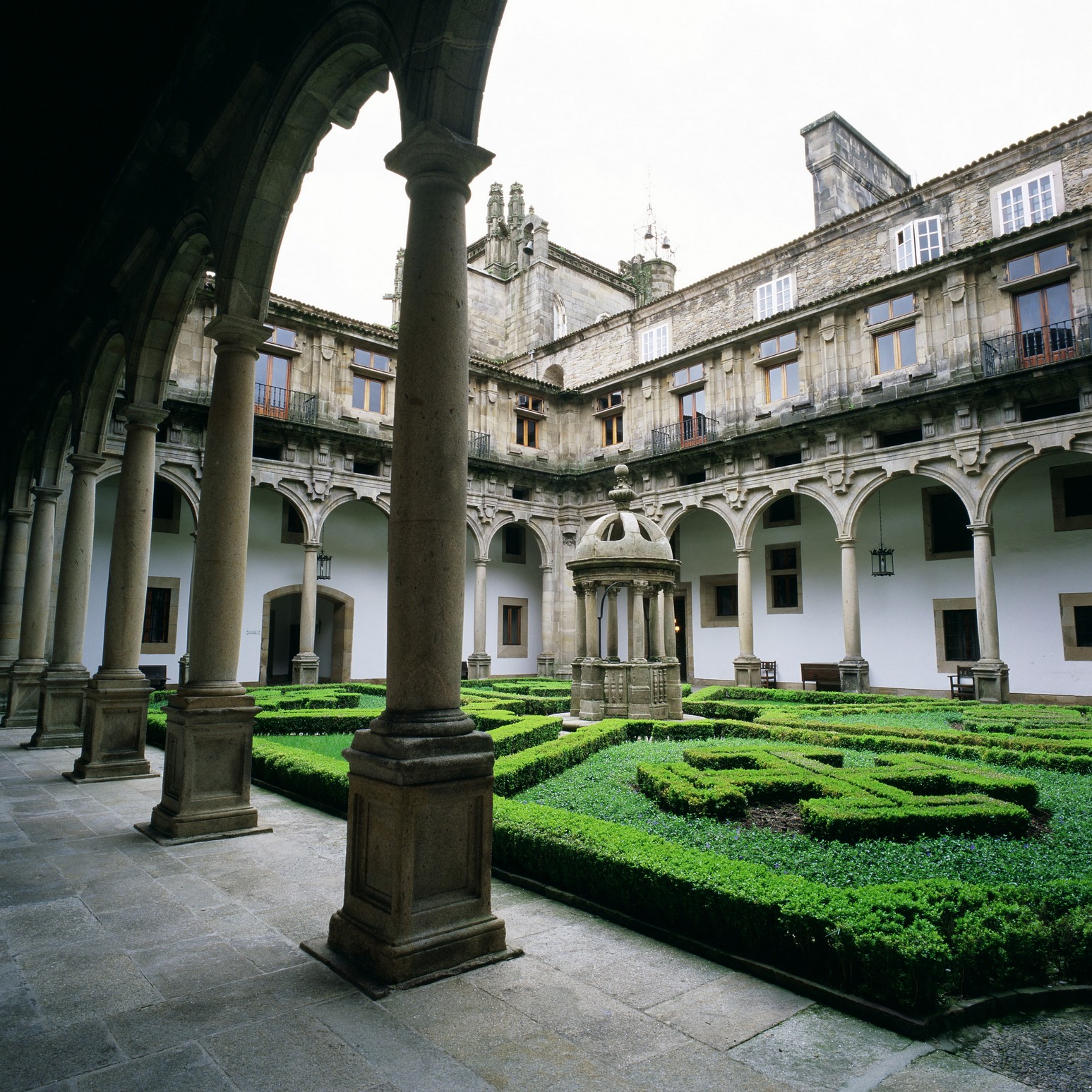 The later, San Lucas' cloister, is smaller than the former. It has a more intimate and quiet style that is completed with the green gardens all over the place. This grass gives the cloister its own colourful personality. 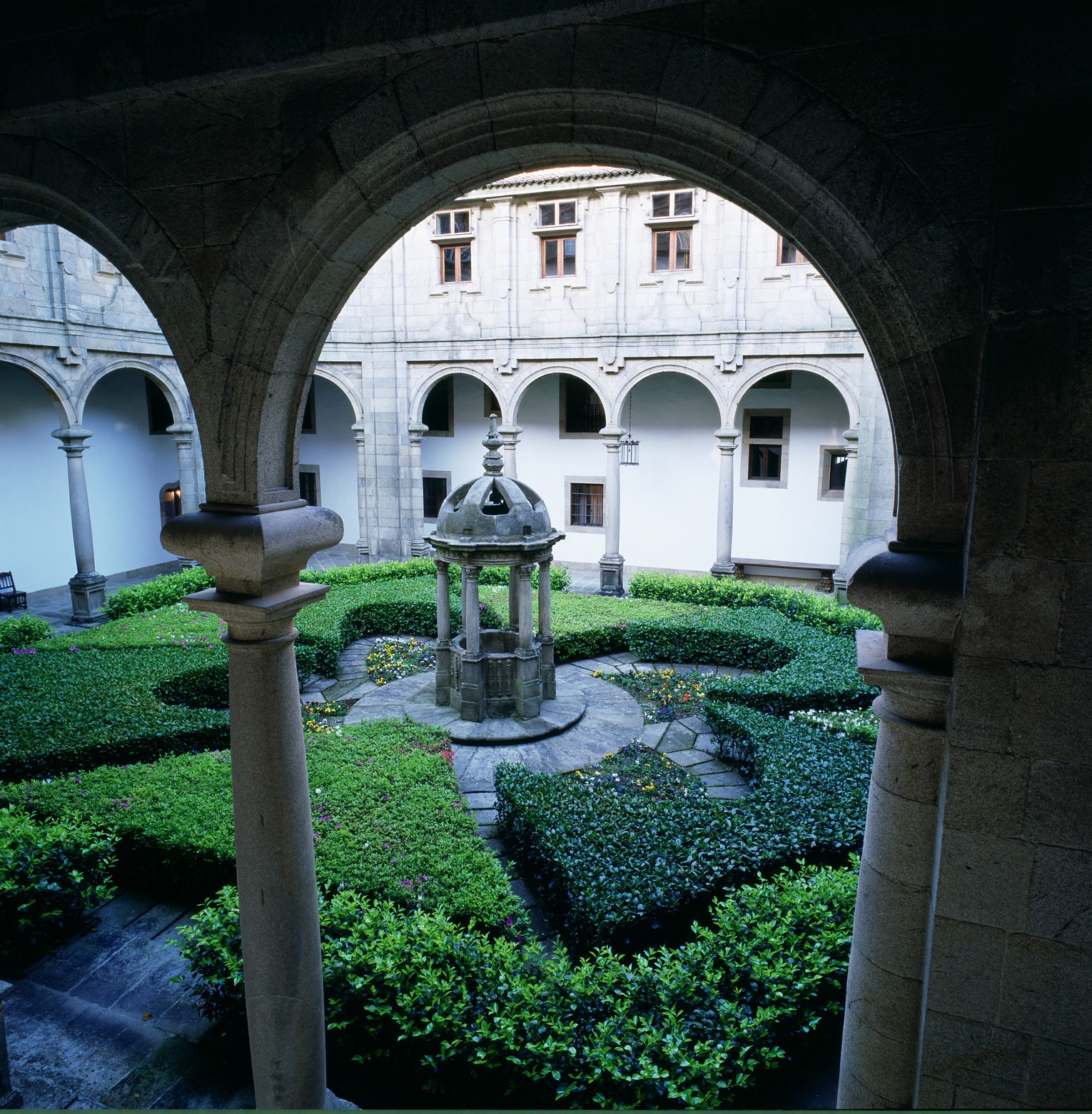 The Parador de Santiago the Compostela also has a Royal Chapel settled in the geometrical centre of the building. This chapel was named National Monument in 1912 and it is part of the Historical and Architectonical Museum that holds the Parador itself. Even its big and spacious rooms are part of this unique scenery where History and Architecture bind together to create an exclusive place in such an exceptional location.