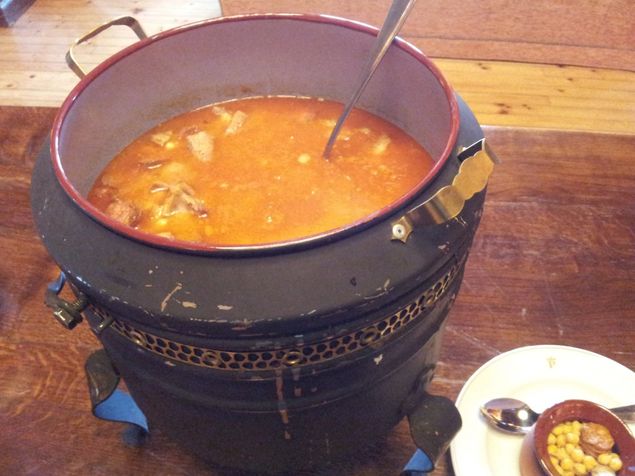 When the temperatures drop and the sky turns grey, is there anything more heartening than a delicious winter stew? Spaniards have long staved off the winter chill with puchero, a thick stew made with grains, vegetables and local meat. Jesús Alonso Cagigal, the chef at luxury hotel Parador Cervera de Pisuerga, shares his recipe for their restaurant's exceptional puchero Spanish stew, prepared in an antique railway pot for that classic flavour.

Located within the Fuentes Carriona Reserve, between the Peaks of Europe mountain range and the grand Ruesga Reservoir, it's no surprise that Parador Cervera de Pisuerga offers its guests puchero, a staple of the region's Spanish cuisine that perfectly accompanies such a rustic setting.

As Alonso Cagigal explains, preparation in an antique railway pot is key to this dish, as it recreates the condition originally used by train conductors who took advantage of the train's steam engine to cook their meals. These pots, which include a small gap in their lower halves where smouldering embers are placed, slowly cook the stew and enhance its flavour. It's well worth the wait!

2. Later, cook the chickpeas, leek, carrot, half of the onion, one clove of garlic, laurel and pepper in a pressure cooker for 40 minutes.

3. Chop the other vegetables and slowly sauté them in a pan in olive oil. Chop the pork bits in small pieces. Add the white wine, tomato sauce and pepper spices to the sauté.

4. Add the pork bits and let the sauté simmer over the next half hour. Afterwards, add everything into the pressure cooker and set it for five minutes.

5. After letting it rest for at least half an hour, it's ready to serve.